More than fifty farmers at Kukua, in the West Mamprusi municipality of the North East Region have been sensitized to the Planting for Food and Jobs program and how they can easily access inputs in this farming season.
Issues discussed at the sensitization forum included the coupon system, access to subsidized fertilizers, certified seeds, fall army worm and best farming practices for improved productivity.
The forum formed part of the ‘Advocacy for Support of Agricultural Value Chain in Northern region’ project implemented by Peace for Life Ghana with support from BUSAC Fund.
Peace for Life is an NGO working in West Mamprusi, East Mamprusi and the Moagduri municipalities of the North East region.
Its focus areas include food security, quality healthcare, good governance and peace.
The NGO is collaborating with the Planting for Food and Jobs program and the department of Agriculture to provide education to farmers in rural communities on how to improve productivity for increased household incomes and livelihoods.
A research carried out by Peace for Life revealed that most farmers in rural communities are not aware of the planting for food program and how they are qualified to register under the program to access subsidized farm inputs.
The Executive Director of the NGO, Mutawakilu Alhassan said, last year majority of farmers were left out in the program because they had no knowledge of its modus oprandi hence the need for the forum.
He said the sensitisation will help farmers to benefit from the PFJ to increase yields to ensure food security.
Mr. Alhassan indicated that about 50 agro-inputs sales points had been registered in various communities in the municipality to enable farmers have easy access to the inputs for improved crop production.
The West Mamprusi Municipal Agric Officer in charge of Extension, John Klutse, said his outfit is already on the ground to provide extension services to farmers.
The West Mamprusi Municipality has already recorded cases of fall army worm invasion in most farmlands.
Mr. Klutse said his outfit has in its stock some chemicals and fungicides to help kill and control the worm infestations.
He called on farmers to report suspected cases to the office for immediate intervention.
Some of the participants commended Peace for Life Ghana for the sensitization session on the Planting for Food and Jobs program.
They promised to use the knowledge gained in accessing the right inputs as well as observe best farming practices. 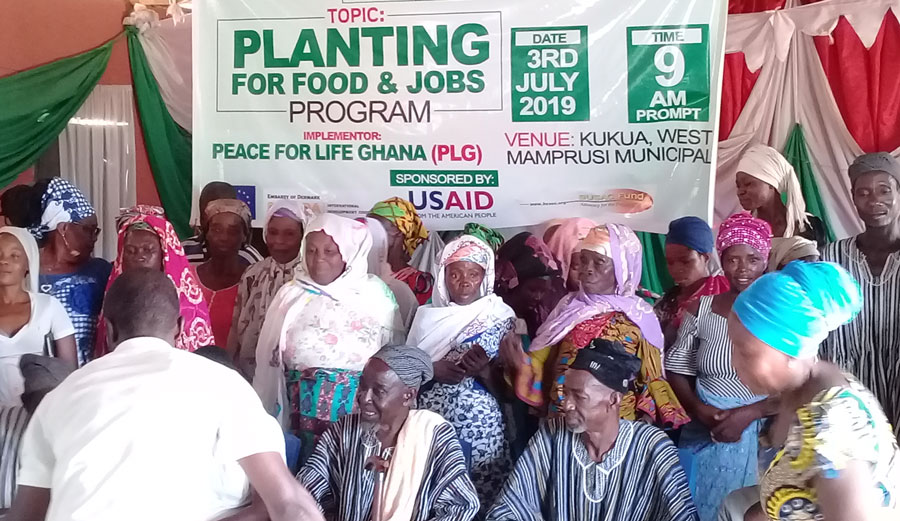 Kukua (NE/R), July 3, GNA – Government has taken steps to eliminate the hassle farmers endure to acquire subsidised agro-inputs under the Planting for Food and Jobs (PFJ) programme by registering sales points in communities near the farmers.

The farmers are to visit the agro-inputs sales points in their various communities to purchase the subsidised inputs instead of traveling to district capitals for such services.

The forum was organised by Peace for Life Ghana (PLG), an NGO, as part of its project dubbed: “Advocacy for support for agricultural value chain in the Northern Regions” with support from BUSAC Fund.

It was to sensitise participants on the PFJ and its gender components and how they could access inputs under it, since a research by the PLG showed that, the farmer groups in the area did not know much about the PFJ.

Previously, most agro-input dealers were located at district capitals making farmers to incur additional costs amongst other challenges to travel to the capitals to acquire agro-inputs.

Mr Klutsey said with the new system, which took effect this planting season, there was no need for farmers to go to Departments of Agriculture for coupons to acquire inputs but rather would go straight to sales points in their communities.

He said 50 agro-inputs sales points had been registered in various communities in the municipality to ensure farmers’ easy access to the inputs for improved crop production.

He urged farmers to follow the prescribed agronomic practices when applying the inputs and the chemicals to increase yields and urged them to report cases of fall army worm infestation of their fields for the necessary action to be taken.

Mr Mutawakilu Alhassan, Executive Director of PLG said the sensitisation would help farmers to benefit from the PFJ to increase yields to ensure food security.

Mr Kaba Pusir, a maize, millet and beans farmer from Kukua, who was a participant, said he is now aware of the PFJ and how to acquire inputs under the programme to boost his production.